History of the Heidelberg Project 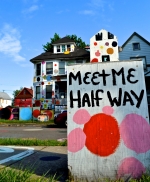 The Heidelberg Project is an outdoor art environment that was developed by artist Tyree Guyton on Heidelberg Street, on Detroit’s east side. Guyton started the project as a response to the deterioration of his own neighborhood, as well as many other Detroit neighborhoods after many years of decline. Through the project, Guyton hoped to raise awareness of the decay of inner-city neighborhoods and the effects of urban sprawl.

Guyton grew up on Heidelberg Street and returned in 1986, starting the project by cleaning up vacant lots with his grandfather. Using the discarded items they collected, and with the help of the neighborhood children, Guyton and his grandfather transformed abandoned houses and vacant lots into massive pieces of art. Guyton also integrated the street, sidewalks, and trees into an enormous work of art, officially calling it the “Heidelberg Project.” The Project initially received unfavorable critical reviews and the City of Detroit ordered him to remove his installations. Guyton persevered and has since received many awards for his efforts. Throughout the years, Guyton continued to update and expand the Project, which eventually grew to encompasses two city blocks.

Join us on Thursday, June 30 at 7 p.m. as Jess Williams,  Director of Strategy and Development,  gives us a talk on the past, present and future plans for the Heidelberg Project.

Registration for this event has now closed.